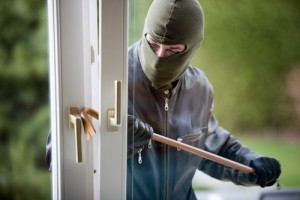 Representatives within the San Joaquin Sheriff's Department have confirmed that deputies arrested a burglar after he was captured by a local pastor.  The Stockton Baptist Church has been broken into numerous times in the past week, said clergymen.   The next time the alarm went off the alarm company placed a call to the Pastor to alert him of the issue.  He proceeded to travel toward the church to investigate matters for himself.

At the time he arrived he found himself face to face with the suspect.  He demanded the man stop in his tracks.  The suspect did not comply.  The Pastor said he did not see a visible weapon and this prompted him to take things into his own hands.  He knocked the burglar to the ground and was able to detain him until members of the San Joaquin Sheriff's Department arrived to the scene.

Authorities reportedly said the pair wrestled for about 5 minutes prior to their arrival.  The fight spanned a rather large distance in the area outside of the church and appeared to be quite violent.  Neither man sustained serious injuries.

The suspect was arrested and transported to the San Joaquin County Jail to be booked and processed.   Defendant Dwayne Hickingbottom is being charged with numerous felony counts including vandalism, burglary and battery.  He is scheduled to be arraigned later this week.  Bail information was not immediately available and it is unclear whether the defendant or a member of his family has reached out to a local expert bondsman.  The matter is ongoing.