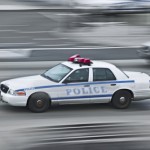 An officer with the Lodi Police Department is credited with finding two stolen cars and arresting three believed vehicle thieves.  A department spokesperson said one of the cars was pulled from a local ditch.

The incident unfolded late last Tuesday night when the officer saw a vehicle that had been called in as stolen.  It matched the given description perfectly and officer Nick Weldon signaled the driver to pull over.  The driver did not comply and instead engaged police in a high-speed chase.   A Lodi PD spokesperson said the chase was abandoned after backup was unavailable and speeds became unsafe.

A short time later, the officer saw a second vehicle that had also been reported as stolen.   That car was followed and pulled over into a dirt lot.  One suspect was apprehended but two others fled.  Suspects #2 and #3 were captured by the San Joaquin County Sheriff's Department.  One was reportedly found hiding inside of a chicken coup.

Sheriff's deputies also found the first stolen vehicle lying upside down in a ditch.  The suspect was not on scene at the time the car was discovered.

All three defendants have been booked into the San Joaquin County Jail.  Two are being held on no-bail holds.  The third suspect has had their bail set at $23,000.

The trio is scheduled to be arraigned later this week.